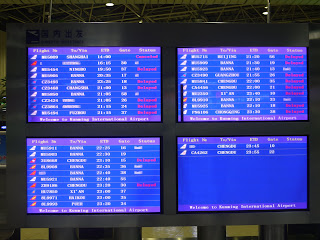 Lijiang wakes up at 9:00, and is very peaceful before that. Shops are shuttered, and people squat at the little canals and brush their teeth. Pink rose bushes are everywhere. Tried a “Naxi Pizza” for breakfast, but it was an inedible thick pancake soaked in grease. When I checked out, Mama Naxi gave me a little bag with bananas and joghurt, and hung a little charm around my neck. If you ever make it to Lijiang, you know where to find the only accomodation option that makes sense. Call 0888-5100700, Mama speaks English. 50 Yuan for a dorm bed, 150 Yuan for the best room with its own covered patio (mine).

I arrived at the hotel in Xi’an at 4:30 in the morning, eleven hours late.

Ok, coming from Hong Kong it’s easy to forget that China is not like a modern European country with bad taste in architecture. It’s a country with twice the population of the EU, where oxen plough rice fields and large numbers of people subsist on less than two euro per day. Lijiang airport looks like a Tokyo subway station and Kunming airport is a large but cheaply built shack with a corrugated metal roof that is deafening in a rain shower. You can’t go from zero to Lufthansa in a few years. Maybe the ox that pulls the airplanes back from the gate had a headache. (Just kidding about the ox. I hope.)