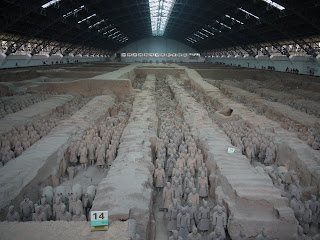 The main attraction in Xi’an are the terracotta warriors. Qin Shi Huang, the first Chinese emperor who unified the whole of China under his rule two thousand years ago, appears to have had tastes that ran into the extravagant, so he had a huge mausoleum built for himself (yet unexcavated), plus an army of 7000 terracotta warriors. Maybe a lot more, 7000 have been found so far. They were all highly detailed, with faces believed to match those of people they represented, and armed, although very little made of wood survived.

The place got sacked soon after he died, so many of the statues are headless and broken, but archaeologists have put most of them back together. Others were left like they were found, to document the damage; and a large number were buried to protect them. They were painted but the paint decays very quickly when exposed to air; all statues on display showed no colors. The warriors are in three “pits”, roofed over; one small officer’s headquarter and two large arrays of 1300 and 6000 soldiers. A walkway runs around the actual pits so one can’t get really close to the army, but it’s still a stunning site. They also have a museum and a 360 degree movie theater that runs an documentary. I have lots of great detail pictures but the one I chose for this post is of the big hall, because what’s most stunning about this site is its monumental size.

I spent the rest of the day in Xi’an. Most of the city is modern and, as usual, uninteresting, but they have a Muslim quarter that has escaped modernization. Lots of atmosphere there, narrow streets, busy craftsmen working on the street, Chinese shops, and lots of carts that sell food. Had great Dim Sum at several carts. The Muslim quarter also has some tourist streets where the tour groups get funneled through to buy souvenirs. It always amazes me how tour groups concentrate on the proscribed route and never stray to the places that are actually interesting and (more or less) authentic, maybe just a few meters away. The contrast between the souvenir streets and the rest is extreme.