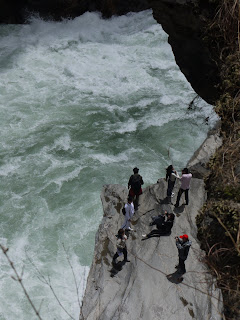 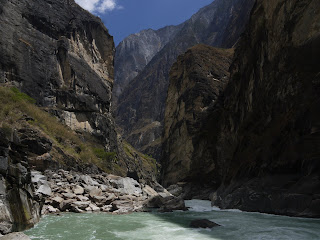 Tiger Leaping Gorge is a very deep and long canyon two hours north of Lijiang. Most people there do a two- to four-day trek, but I made it a day trip to the most scenic spot. As I write this, I am sitting on the Daydreaming Rock down at the foaming Yangzi river at the bottom of the gorge. In the middle of the rapid is the Tiger Leaping Stone that gave the gorge its name; legend says that a tiger used it to cross the river. Why it would do that I don’t know, there is a vertical rock wall on the other side; the highest mountains on the sides rise to 3900 meters with 80 degrees rock walls! That’s more than twice the depth of the Grand Canyon in Arizona. Yet the sun reaches the bottom at 13:00.

It’s a 340m climb down a rocky path from Tina’s Guesthouse, a popular stop at this point. We got a few people together and hired a guide. The views are fantastic. The climb back up, using another route, was far steeper; an almost uninterrupted series of narrow steps, hugging the edge of an almost vertical rock wall. Ropes are strung on the wall side to hold on to. There is a very long ladder at one point where no path could be built, and another shorter one later, that lead straight up the cliff face. The ladders are made from steel rebar, welded and strung together with wires (so they shake a little) and have steps only every 50cm or so. Quite tiring. It’s less dangerous than it sounds because it was dry.

It seems that the Chinese modernization rampage, here building another Yangzi dam that would flood the gorge, is temporarily on hold. Still, I am very glad that I had the chance to see it before it might get destroyed.