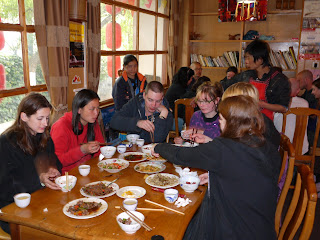 Had lots of rain at night, and a short shower in the morning too. There is a hill that cleanly divides the old and new town of Lijiang, with the very tall Looking At The Past Pavilion pagoda on top. The panorama from its top over both towns and the mountains in the background is fantastic. I took a panorama series of pictures with cloudy skys, and went back down to see the nice wooded park around it. Then the sun came out and I had to run up again and do it all over.

Walked around in Lijiang for a few hours. There are quite a few tourists here (it’s a Sunday), but they are all in a few prominent streets, and just ten meters away I pretty much had the place to myself. It’s easy to get lost in this maze, and there are beautiful views everywhere.

Went back to the guesthouse and had Mama Naxi book a flight to Xi’an for Tuesday. When the ticket arrived, my name was misspelled, and Mama Naxi sorted that out with furious bursts of Chinese. I also booked a bus to the Tiger Leaping Gorge for a day trip. It’s normally a two or three day hike, but the weather report said thunderstorms and the trail on the edge of the cliff is steep and slippery in places.

Dinner was great again. It seems that whenever someone mentions an exotic and out-of-the-way place in Asia, half the people at the table has been there, and give recommendations on hotels, train schedules, and sights, and report funny stories. Mama Naxi’s is an information nexus of Lijiang. The picture shows our dinner table.