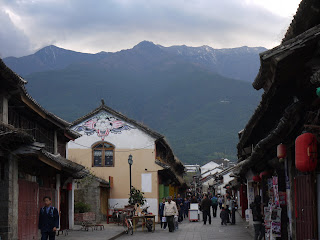 A short bus ride brings me to Caicun, a village at the large Erhai Lake close to Dali. From the bus stop, I join a trek of over a hundred old women with large straw hats, wicker baskets, and the occasional plastic bowl with fish, through the narrow streets of Caicun, along the lake, to a market square at a pier on the lakeshore. It’s packed with vendors with carts, tables, or just bowls on the ground, selling vegetables, fruit, meat, and fish. Chickens are slaughtered, plucked, and sold on the spot.

There is a small temple where people bring bowls of offerings, like fruit and fish, and return with incense that is burned on a pyre in the middle of the square. It’s quite crowded everywhere. Even Chinese tourists are aliens here; I saw only two.
They have tour boats on the lake, but they take all day, so I went back to Dali and rented a bicycle to visit several other nearby villages, and to keep kirikou happy. Some of those villages, and the paths through the fields, don’t seem to get any tourists so children stare and smile at me and call out “hello” all the time.
Also took a chairlift up the mountains behind Dali. It takes 20 minutes to gain some 600 meters, gliding between and above the treetops. People call out to me and take pictures, I guess they don’t see many Europeans here… Loudspeakers mounted on the chairlift towers play official-sounding Chinese announcements.
There is a temple complex at the top, and many hiking paths. The views are great, but some clouds have come in and the valley and the lake are a patchwork of sunlight and shadow. When I return to the chairlift station at 18:05, they had just shut it down. Walking is impossible, there is only a very steep dirt path and it’s only an hour till sundown. So the officials confer and restart the chairlift just for me!
I am having a hard time selecting a picture of the day, so I’ll pick one that captures the mood of Dali, rather than something more exciting.