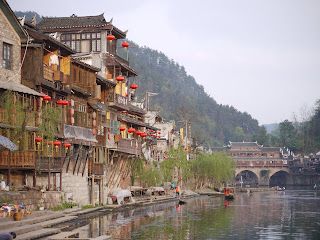 Actually I wasn’t interested in Huaihua, it was just too late to continue. My destination was Fenghuang, and today I took a bus there. It’s only 40km as the crane flies, but takes two and a half hours because the road is almost never straight and goes through one gut-wrenching curve or switchback to the next.

I had been unable to reserve a hotel because the two numbers given by the Lonely Planet did not reach someone who speaks any English. So I just walked around in Fenghuang until I find a hotel I like, and check in. Of course, no English at the reception, but they have an Internet PC and we discuss the rooms using the Yahoo translator. Cool. They also have a talking calculator that chirped a cheery comment in Chinese on every key press. The Flowers Procumbens Hotel – who comes up with these names? – is modern, very uncharacteristically stylish for China, and generally pleasant.
Fenghuang is a beautiful old town on both sides of a river. The waterfront with its old but renovated wooden houses is exceedingly scenic in the evening sun. I really love the place and will stay here for a few days. There are tourists but not many, although I bet that it’s completely packed during holiday seasons. They are all Chinese, again no Westeners in evidence today. I am standing out so much that Chinese tourists ask me if they can take pictures of me.
It took a while to find a restaurant because of the language barrier. In the first I asked for a chicken dish by pointing at a huge chicken in a coop outside, and all seemed fine, until the cook grabbed the chicken and carried it to the kitchen before I could stop the impending massacre… The strategy works at another place, and I get my chicken. Preparation is easy: they simply chop it into rectangular pieces, bones at all, and fry it in a wok; I wolf it down with chopsticks except the head and the feet, couldn’t find any meat on those.
This Internet Cafe in Fenghuang has well-maintained Windows PCs that don’t put a virus on my flash card, and I type this into blogspot.com and not into a Google search box before cut-and-pasting it into a mailer with a maximum lifetime of 30 seconds between crashes. Even picture uploads work without sending IE south, so I added a few to previous posts.