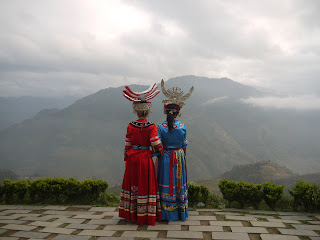 Took another local bus to Longsheng. Quite crowded. The first nine kilometers went through Guilin’s urban sprawl, no less ugly than downtown Guilin, just highrise concrete boxes that hide the peaks behind them.
The scenery improves after Guilin, first rolling hills and soon the road winds its way up to 630m, then back down to 250. There is a burnt smell, and the driver stops and cools his brakes with a water hose; steam rises. At one point the driver looks at me, asks Ping’an?, and when I nod, he stops and I get oiff and catch a bus stopped on the other side of the road. After numerous switchbacks, the new bus reaches the small hill village of Ping’an at 825m.
It’s a marvellous view – many old ornamented wooden houses cling to the side of the mountain on stilts, with every bit of space used. I am staying at the Countryside Inn, all wood, slightly creaky and unheated (it’s fairly cold up here) but very nicely renovated with friendly English-speaking staff.
People come here not only for the village, but for the rice terraces. They cling to the side of the mountains, following its contours, just like the village itself. They are huge – dozens and dozens of terraces, usually no wider than one or two meters, and some as narrow as 30cm, separated by artificial walls and an ingenious irrigation system. There are several paths that climb up to over 1000m and allow fantastic views over the endless terraces. Wisps of fog add atmosphere. In the evening, the fog creeps up from the valley until it’s difficult to see.