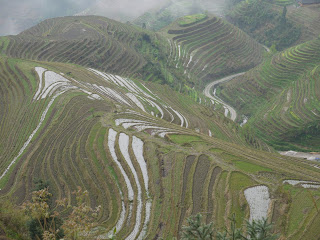 More walking among rice terraces. They have pretty much carved up most of the mountains around Ping’an. Most rice paddies are less than a meter wide. Like the fields, the path follows the contours of the mountain, and is mostly paved with slippery stones. Fog rolls over the hills all the time, sometimes I can’t see anything and sometimes a vista opens up, and changes again a few minutes later.
At strategic points, local women in colorful dresses and hairdresses, carrying baskets of souvenirs, waylay tourists. But like elsewhere in China so far, they are friendly and never tenacious.
There are no streets in Ping’an, just narrow winding paths between the wooden houses. Most of the time, the paths are stairs. There is much new construction, but fortunately using wood and traditional designs, using concrete only for foundations.