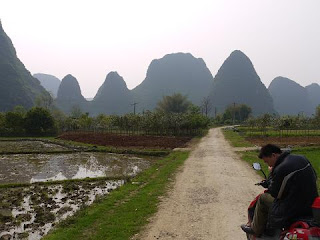 In the morning, I went out on a bicycle and with a guide, David Wong, the manager of the Hongfu Palace Hotel. He speaks English well. It took a while to find a bicycle that was large enough for me. David used an electric scooter because he was afraid that I’d outrun him, and in fact I did a few times because he was faster only uphill on smooth asphalt.

First we went to Moon Hill, a peak with a large crescent-shaped hole. I took a minivan ride up to Dragon Cave. The road is terrible and the van shook pitifully. Where other drivers keep car wash coins, he kept a collection of rusty bolts. The cave is huge, with a long convoluted path cut through its many caverns. The first leg is by boat. Later some sections are under water too, with Indiana Jones bridges complete with broken logs (but at least they weren’t suspended high up with ropes). The path was only a meter high in some places. My guides pointed out several dozen rock formations with flowery names like “dog rides golden lion”. They knew all the places where I should take pictures and wouldn’t continue until I did so. They spoke no English at all, and could only point at names on an English/Chinese map.

After returning from the cave, we continued by bicycle through the most marvelous scenery, through a valley of farm land, along Yulong River, surrounded by Yangshuo’s trademark sugarcone peaks. The road quickly turned into a narrow trail through the fields and small villages, most of which cannot be reached by a regular road. Eventually we reached Jiuxian, a historic village that really looked like it hadn’t been touched in centuries. We had excellent steamed fish there, caught the previous evening. The last stop was the Dragon bridge, an ancient stone arch in another old village. But what made this ride so fantastic was the scenery around us, not the monuments.