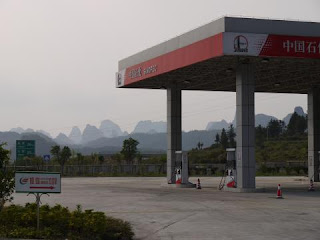 The bus from Guangzhou to Yangshuo takes eight hours, but there is so much to see that it’s never boring. All the long-distance buses are reasonably modern and comfortable, and unlike other buses I have used in Asia, quiet (both the engine and due to the absence of soap operas on the TV set). It makes three rest stops. Before one is allowed to enter the bus, the baggage gets x-rayed, as always.

At first, the towns we passed through were all well-maintained sterile concrete affairs with wide boulevards with flower beds in the middle, without any sign of the seediness one can find in Guangzhou. A bit like Wolfsburg with flowers. But later on, towns look like Asian towns are supposed to look like – a little run down, busy, alive with merchants and cyclists and animals and shopkeepers going about their trade. The freeway is new, wide, and smooth, except in a few places where construction isn’t finished.

About an hour before reaching Yangshuo, the karst mountains begin. They consist of countless conical pillars of rock that form a violently jagged skyline all around the road. Yangshuo itself is nestled in between of several karst pillars. It’s a busy little town that caters mainly to tourists, but manages to preserve its soul. The main street is Xi Jie, or “Western Street” as it confusingly shown on signs even though there is very little English signage in this town. It’s a pedestrianized street lined with modern shops and restaurants, in old two-story or houses. It’s sort of pleasant despite all the glowing ads and tourists. Virtually all the tourists are Chinese, I saw perhaps a dozen Westerners all evening.

My hotel is the Hongfu Palace Hotel. The rooms are a little cheerless despite the wooden floors, stucco, and old furniture, but the building is in is a magnificent 400-year old guild hall. Most of the other hotels are either backpacker hostels or sterile Chinese tourist hotels. And as it’s off-season, I haggled the price down to less than half the rack rate with little effort. But, no WLAN.