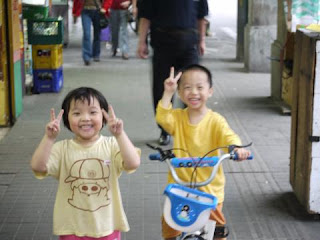 Using the express train to Guangzhou (a.k.a. Canton) is easy. Bags are x-rayed, visa are checked, and exit and entry cards are needed, but everything is much faster than the same procedures in Macau. At the station, the candy store sells palm-sized chocolate coins, but only ancient Chinese motifs and Dutch 2-Euro coins. The train is roomy and comfortable; the car attendant stands to attention as we board. The very slowly scrolling LED display in the car shows instructions for sneezing properly.

I am staying at the Elan hotel. Trendy, modern, clean, and bright, much better than the hotel in Hong Kong. Oddly, they want a deposit of 350 Yuan…

In Guangzhou, there is much less English. Street signs and the metro show English, but there was a lengthy notice in the train station in which the only English word was “notice” at the top (very helpful guys), and the long-distance bus terminal where I bought my ticket to Yangshuo for the next day had no English signage whatever and the ticket agents didn’t speak english either. I got my ticket by pattern-matching the Chinese characters, and pronouncing “Yangshuo” until there was rapport. No problem.

Large sections of Guangzhou are ugly concrete and chipped paint and glass towers separated by a maelstrom of traffic and endless asphalt. So I went to Yuexio Park close to the hotel; the park is very large and contains hills, ponds, lots of banyan trees, a waterfall, flowers, and a few shrines. Very relaxing. I then took the underground to Shamian, a small island just beyond a tangle of freeways and highrise construction. Shamian is a quiet refuge of colonial charm, with lots of trees and a narrow park down the central avenue. Finally I walked for a few hours in the western part of Guangzhou, which is still untouched by rampant modernization and has shady tree-lined streets, old buildings, and traditional shops open to the street with people working.